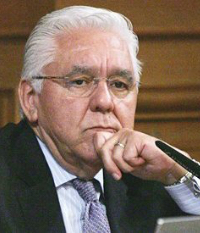 Art Torres was appointed to the Covered California Board of Directors by the State of California’s Senate Rules Committee on July 8, 2015.

Torres is vice chair of the Governing Board of the California Institute for Regenerative Medicine (CIRM). As vice chair of CIRM, he helps oversee the allocation of $5.5 billion in stem cell research to California.

He currently serves as the Alumni Regent on the University of California Board of Regents and is the current President of the UC Alumni Association representing 2.2l million UC Alumni worldwide.

He was a German Marshall Fund Fellow where he prepared a paper on Western European immigration policies.

In 1990, he was the U.S. Senate appointment to the Commission for the Study of International Migration and Cooperative Economic Development whose study was submitted to then President George Bush in 1990. He co-wrote the last immigration reform law that President Ronald Reagan signed in 1988, but never fully implemented.

Prior to being elected to the California Legislature, Torres served as the national legislative director for the United Farm Workers Union, working closely with Cesar Chavez and Dolores Huerta.

He is the former president of the San Francisco Public Utilities Commission and in 2013 he was awarded the Silver Spur Award for his public service to the Bay Area.

Torres holds a B.A. degree from UCSC’s Stevenson College and a J.D. from UC Davis School of Law. He also served as a teaching fellow at Harvard’s John F. Kennedy School of Government.